This was by far not the typical event that we are hired to do but it was one of the most incredible experiences that we have ever had! We were brought on to create an intimate and elegant dinner party for Presidents George H.W. Bush (41), George W. Bush (43) and their guests. 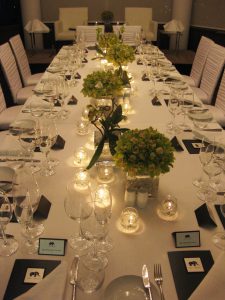 The logistics involved in bringing together this event were above and beyond anything that we had done to date; dealing with the Secret Service and requirements needed for the Presidents were unlike any of those usually required by a special event. The week leading up to the event the Secret Service were at the venue every single day assessing entry & exit points, possible threats, reviewing every detail of our itinerary for the event, and even ensuring that the furniture we had for 41 & 43 (this is how their Secret Service detail referred to them) was sufficient. Any windows that were exposed to potential snipers had to be covered and we even had tall barriers on the patio to cover the Presidents when they went outside. “Thankfully” we had our own Secret Service snipers on the roof of the building during the event.

On the night of the event, when the Presidents arrived at the venue, it was pretty surreal. These men who had been Leaders of the United States were standing right there! They were even overheard commenting on how great everything looked. The buzz around the room was phenomenal. Some of the people attending were meeting the Presidents for the first time.

As the night progressed, the guests sat down to an amazing dinner prepared by Savoury Chef and as they ate DreamGroup was privy to the banter that President George W. Bush was making at the table. He was talking about decisions he had made in the White House and the effects they had as if he was casually talking about what he had done earlier that day.

After dinner there was a Q&A session with 41 and 43. It was the first time that both Presidents had ever been interviewed together side by side. The questions from their guests weren’t what you might expect. Someone asked 41, “What was it like when you found out that your son had just been elected President?” 41’s response was “I felt a huge sense of pride and was excited for him, but also knew what he was about to go through”. Another one of the guests asked 43, “How do you balance being a President and being a family man?” and he responded, “I couldn’t have done it without my wife.” The answers given were very real and authentic.

This is definitely an event that goes down in the DreamGroup history books. Our expertise in producing events, managing details, and our philosophy to exceed client expectations ensured that this event (like every other) was carried out flawlessly.